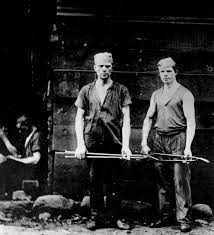 Do you write about your day job? When I consider the kinds of work that seem to crop up most often in fiction and poetry, I see a tendency toward writing about physical work. Construction work or baking bread might seem like a more romantic jumping-off point for our writerly meditations; after all, we live in America, where Whitman wrote [apologies for the wrapping of Whitman’s long lines here]:

I hear America singing, the varied carols I hear,

Those of mechanics, each one singing his as it should be     blithe and strong,

The carpenter singing his as he measures his plank or beam,

The mason singing his as he makes ready for work, or leaves off work,

The boatman singing what belongs to him in his boat, the deckhand singing on the steamboat deck,

The wood-cutter’s song, the ploughboy’s on his way in the morning, or at noon intermission or at sundown,

The delicious singing of the mother, or of the young wife at work, or of the girl sewing or washing, […]

In “I Hear America Singing,” Whitman associates physical labor with the strength and sweetness of the workers’ “singing,” which isn’t literal singing so much as the sense of satisfaction in and knowledge of their work. To Whitman, the very essence of their humanity shines through as they do their jobs.

But if we fast-forward a bit in poems of American work, we get to Philip Levine, who probably wrote more about physical work than any other 20th century poet, but who doesn’t see physical labor as quite the seat of contentment that Whitman does. In fact, the mind-numbing nature of the work Levine writes about–assembly-line work at Detroit auto plants–sometimes calls into question the very humanity that Whitman finds so evident in physical labor. Consider the opening of Levine’s “Coming Close“:

Take this quiet woman, she has been

standing before a polishing wheel

for over three hours, and she lacks

twenty minutes before she can take

a lunch break. Is she a woman?

“You must come closer” to discover the answer to this question, Levine writes, and “you,” it becomes clear by the poem’s end, is a white-collar worker, someone who hasn’t experienced anything like what the woman does.

For both Whitman and Levine, though, physical work was a location of poetry because it can be seen. The body is in motion. Not so much with a lot of day jobs–you may not even be able to tell what a lot of office workers, busy at their computer screens, are doing all day. But I doubt that means that the poetry is missing. Levine, after all, took work that did not particularly show humans “singing” and forced readers to “come closer” until they, like the “you” of Levine’s poem, were marked “now and forever.”

In case you missed it, NPR ran a good feature on poets’ second jobs a couple days ago. I particularly like Lawrence Joseph’s thoughts on the working self and the writing self: “It certainly is not the only ‘self’ in my work, but I’ve wanted, since my first book, to let the reader know that the poet writing the poem is, among his other identities, also a lawyer.”

When I worked as a bookseller, I tried to write a poem about cash flow at the register once–it didn’t work. What ‘other selves’ make it into your work–or don’t–because of your day job, folks?