The evening the verdict in the Zimmerman trial was announced, I thought that somehow I could not pay attention to it. That’s white privilege, in case you needed an illustration. I can turn off my computer and go down the street or to sleep and not think about it, because for me, a white skinned Jewish girl, if I don’t think too hard about it, it can actually seem like it doesn’t matter. The spoiler is, of course, that I couldn’t not think about it. I couldn’t think about anything else, and for the first time in a long time, I felt the gross creeping of white guilt, something I try not to entertain because it’s so unproductive, so paralyzing, so indulgent. But there it was. The thing about privilege is that you cannot give it away. Not really. You can pretend you don’t have it, people do that all the time. You can step aside and make a space for someone else, but you always have your privilege, regardless of whether or not you want it. There’s nothing like it in the whole world.

Writing is the thing I count on when I can’t figure out how to maneuver through the world. I usually sort through sexism, racism and other disturbing daily social phenomenon with essays, but these days my job is actually to write fiction, seeing as I’m in an MFA program.  I’ve never felt like it was harder to justify making art.  For days, it felt like the most privileged, smug thing I could possibly do. I’d written a blog post shortly before the verdict came in, about my process of writing fiction (anxiety, caffeine, procrastination, frantic typing, delirious joy, exhaustion, anxiety…), and when I looked at it later, I knew I could not possibly post it. It was irrelevant. It was nothing. It was maybe even cruel.

I’ve been thinking about endings lately-the ones that are neat and tidy and satisfying, the ones that have been earned, as well as those that are vague and sloppy and ultimately realistic. Trayvon Martin did not deserve any kind of ending at the age of seventeen. There is no age at which he could deserve the ending that he got, and yet, while so many of us are shocked and bruised by the verdict, we also know that this is the reality of living in a racist country.

Being a progressive activist means understanding that people are complicated, that we all have multiple identities that we engage with to varying degrees. It’s not like it isn’t possible to be many things at once-writers know that, maybe better than anyone else. Sherwood Anderson wrote, “The whole glory of writing lies in the fact that it forces us out of ourselves and into the lives of others.” There are entire books to be written about how to responsibly write about people who are not us without exoticizing, or stereotyping, but for the sake of this piece, I’ll just say that writing, particularly fiction, is-or should be-an exercise in empathy and ethics. For that reason, and thousands of others, it’s important. It can keep us alive.

Chanel Dubofsky’s work has been published in RH Reality Check, Cosmopolitan, The Frisky, The Billfold, Lilith and The Forward, among others. She is working on her MFA in Fiction at the Vermont College of Fine Arts and lives in Brooklyn, New York.

Nick Ripatrazone’s novella, This Darksome Burn, is forthcoming from firthFORTH Books, and his short story collection, Good People, will be published by Foxhead Books in 2014. His fiction has received honors from Esquire, Shenandoah, The Kenyon Review, and ESPN: The Magazine. He lives with his wife and twin daughters in New Jersey. 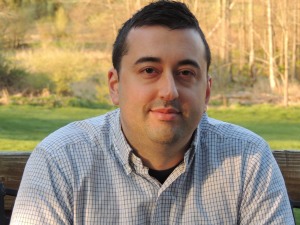 Why did you decide to pursue an MFA?

I began the MFA program at Rutgers-Newark in 2009, a few years after completing an MA in English Literature there. The MFA program was relatively new, so I attended based on the excellent faculty: studying fiction with Jayne Anne Phillips, Alice Elliott Dark, and Tayari Jones (as well as Paul Lisicky, a visiting professor) was a unique opportunity. I had submitted both critical and creative theses toward my MA, but I wanted to really engage my creative work during this second round of graduate study.

When you started the degree, what were you leaving behind?

Besides sleep, not much: END_OF_DOCUMENT_TOKEN_TO_BE_REPLACED

In every poetry class I’ve taught so far, I’ve slipped Gwendolyn Brooks’s classic “We Real Cool” into the first week or so. My students, having read the poem silently to themselves, respond to the rhyme, the three beat lines, the language that seems to bare its face while still hiding something. When I ask them what they think the speaker thinks of the “we,” they sometimes say that he or she is warning the young pool players or making fun of them, even as the speaker inhabits their late-lurking, straight-striking world.

But after they hear a recording of Ms. Brooks herself reading the poem, something changes. Suddenly, the first word of each line — “lurk,” “strike,” “jazz” — takes on a dotted rhythm, and the “we” that my students at first read as bearing a full third of each line’s weight becomes only a decoration, a grace note.

This can’t help but change their reading of the poem, one which only scratches the surface of Brooks’s commitment to writing honestly about the black communities she observed and moved within. Brooks was the first black author to win the Pulitzer prize and the first black female poetry consultant to the Library of Congress, but she didn’t use that success as an excuse to occupy only the mainstream. In her later career, she left Harper and Row to publish with a series of small black companies. She also called attention to the change in critics’ response to her work once she began publishing with these presses: some seemed to fear the political content of her work, and she believed that they “did not wish to encourage Black publishers.” Her two-volume autobiography, now considered among her most important prose works, was at first criticized for not containing enough personal information, or “domestic spats,” as Brooks put it.

Given her prolific career, her activism, and her constant effort to show black American lives in sharp focus, It’s no wonder that even the recorded sound of Brooks’s voice allows her own work to be heard more clearly and immediately by young readers. Moments after hearing “We Real Cool,” one recent student commented that Brooks had read the poem as though one of the poem’s verbs –“lurk late” or “die soon” — could totally eclipse the person, the “we,” doing it. As though “we” — the collective as well as the individual within it — could disappear in the action someone else sees.

This blog strives to serve as a place for writers with day jobs to reflect on the balance between the work that earns them their living and the work that sustains their humanity, and the happy intersections between those types of work, whether they happen frequently or rarely. For every working person, work is to some extent caught up with his or her humanity: feeling useful, using one’s talents and skills, and supporting oneself or one’s family are all ways we continue to feel alive, necessary.

But for writers, work and humanity are particularly inextricable from each other: in our best writing, our job is to be brutally honest about what it means to be human, even if that means acknowledging the most painful, contradictory aspects of human behavior. To me, this also means that writers have an extra responsibility to pay attention to injustice—as Muriel Rukeyser put it, “If you refuse,/ wishing to be invisible, you choose/ Death of the spirit, the stone insanity.”

With that in mind, and as the sole person running this blog, I can’t pretend to any policy of political neutrality. In the perplexing and disturbing wake of George Zimmerman’s acquittal and in memory of Trayvon Martin and other victims like him, I feel compelled to return my attention to those writers—like Gwendolyn Brooks, Audre Lorde, Muriel Rukeyser, Adrienne Rich—whose day job was activism, and for whom writing and activism were in fact joined at the hip.

On this blog, I’ll feature activist writers, living or dead, starting this week—if you know of a living writer who would like to be interviewed, or if you’d like to recommend that I profile a famous writer-activist who’s no longer living, send their names my way.

Bartender cut you off again? Wake up to find the bill collector at the edge of the bed? IRS in your kitchen, eating the last of your Fage?

Drunken Boat is seeking “poems that engage with debt: the friction between desire and limits, the intersection of ownership and obligation.” We know something about THAT.