Muriel Rukeyser has been dead for 33 years, but we just can’t keep away from her. On the occasion of her recent centennial, Chanel Dubofsky and I gave her a nickname and talked about the ways this incredible lady built essential bridges between art, activism, and work. 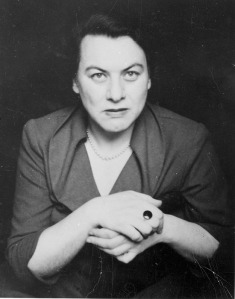 Courtesy of the Paris Review.

So–I guess I would like to start by asking you how you first came to/ heard about Muriel Rukeyser, or if we can give her a posthumous nickname, “The Ruk.”

So I think I heard about, um, The Ruk in college. I was in this weird band of poetry people.

CD:  YES. Even though I’m not actually a poet, we needed each other. Anyway. Someone brought The Ruk to a gathering, and she immediately felt important to me.

LF: What was it about her, do you think?

CD: I think it was a) that she was a lady, and b) that her stuff was not like anything I’d read before.

LF: Right. She was often held up, especially in her own time, as unclassifiable—multiple genres in single works, experiments with form and prosody. One thing I like about her is that she’s never boring: she seemed to engineer her own work to avoid that kind of poetry-induced-tiredness that can come with some perfectly tuned lyric poets.

CD: I think she’s super accessible to people who don’t know from poetry, which is not a thing to be said about all poets. But I think when I learned more about her, I became really obsessed with her politically.

LF: Yes. What about her politics in particular?

CD: Well, first that quote about women and truth: [from Houdini: “What would happen if one woman told the truth about her life? The world would split open.”] Which is basically everything.

LF: And by “the truth” Muriel always seems to mean “the testimony of the witness to injustice.”

CD: I was also drawn to the fact that she was a journalist AND a poet, and used her politics in both of those worlds.

LF: Yeah–I think those go hand in hand with the urging to witness. I think often about her poem “To be a Jew in the 20th Century,” which was adopted by the Reform movement to include in its prayer-books.

LF: That poem stands out for me as representative of her personal mandate to witness–you know, “not alone the still torture, isolation…”—but also the struggle inherent in witnessing: “accepting, take full life. / Full agonies.” This is not supposed to be an easy job, the job she identifies for Jews/ writers/ women/ activists.

CD: Also the part about “To be a Jew in the 20th century/ Is to be offered a gift. If you refuse,/ Wishing to be invisible, you choose/ Death of the spirit …”

CD: It kills me. Every time I think about my personal Judaism. Which is so mucky right now, and always. But also, she was a communist, so it’s comforting to me that she also struggled.

LF: What do you think about her with respect to the idea of a writer’s “day job”? I mean, she certainly isn’t doing the activist and teaching work in order to just support the making of literature–they’re inextricable from each other.

CD: Personally, I think a lot about being able to do both the activist writing and the fiction. Because it’s still hard to take fiction seriously. But she knew something, The Ruk.

LF: She really believed in poetry as an action, it seems, not just a reflection. And in a lot of her work, like in The Life of Poetry, poetry as action kind of stood in for all the activities that the Cold War stood against. I’m often with you on the “what is literature for” front. But I admire The Ruk in her commitment to the belief that it—literature—was never idle, always active.

CD: Yes. And always pushing the envelope. I also think that The Ruk makes me think about the political possibilities of my fiction.

CD: Well, she used her work to talk about politics, political people—LESBIANS. For me, fiction is where I go to ensconce myself in a different world that’s just…not mine. At least at first. But I do always wonder, how can I do politics in it? Because that’s important to me always. And The Ruk just went for it, I think.

LF: It’s interesting to compare her prose writing and poetry in that vein–because for poets, I think it’s implied that the adopting of different voices–including little-heard voices–can be done directly, as in persona.

CD: This thing I’m writing about now is about straight people, and their relationship, and those around them. But where do I put feminism? and race? and all those other things? Do I put them in there? How do you do that authentically? How do you put all your identities into your work?

LF: Hm–I think maybe a key is not thinking of them as separate? I think on a certain level, academic discourse encourages us to separate those issues. If there’s a bottom line, or a bottom question, like “how can we see each other as human?” or “how do we respond to another person’s self-hatred?” those things start to unify.

CD: Yes. I think The Ruk models not separating them. It might have been easier for her to do a day job because of that.

LF: Do you think there are any writers now working in the vein of The Ruk? Achieving that blend between writing-as-action and meaningful, non-writing work?

CD: Hmm. I thought of Junot Diaz, but I’m not sure that’s exactly right.

LF: Well, yeah–I think he does maintain a blurry line between himself as storyteller and as outraged journalist. Roxane Gay also comes to mind.

LF: But you know, I can’t think of a hell of a lot of [younger] poets. I don’t know if that is because a) the hardcore activist poets are now performance poets, b) poets are on the whole more bound to the academy than fiction writers, or c) I just don’t know about these people yet. I really want someone to post a list of young, 20s and 30s poets who are trying to build that bridge.

CD: I’m just thinking about fiction people and how sometimes I read things and think, that is so feminist—Alice Munro, who is controlling my brain right now. There’s a difference between A.M. and writing feminist things and having that be what pays you.

CD: Yeah. A.M. is so subversive in her fiction re: women, religion, sex.

LF: Well, I guess it matters if you think, basically, that fiction is a way of recording/ inciting change–at one time that was indisputably true, but now–up for debate, I guess.

CD: Do we think that those who read MR’s poetry but didn’t know about her political stuff felt her subversion?

LF: HM. Well this is an excellent question, because I think that when she comes up now in creative writing classes, or when MFA poets read The Life of Poetry as a “craft” text, the context of her whole life and writing, as well as the interconnectedness of all her texts, get lost. The Life of Poetry, as Rowena Kennedy Epstein points out, is a Cold War document. Poets coming to it for the first time, as a “philosophy of composition” text, do not see it through that lens. And I don’t know that that means they don’t feel her subversion–her writing is subversive, her prose is—but missing that context is a shame.

CD: I feel like those contexts are what connected me to poetry.

CD: As someone who’s not a poet in the making-poetry sense. Seeing that in the text made me hang in there.

LF: Yeah. I still think that poetry is supposed to have an occasion, even if we resist that in our postmodern way—the occasion can be as small as hyperventilating about a bad interaction on the street, or a miscommunication between friends. But I think it’s important to mark those occasions, rather than just pretending that language has a body of its own. (I mean, I also, as a poet, believe that language has a body of its own–but I know I can’t lean on that alone).

Further resources for the The Ruk-obsessed:

3) Stefania Heim’s revival of an unpublished Rukeyser essay at CUNY Center for the Humanities Lost and Found project.

Chanel Dubofsky’s work has been published in RH Reality Check, Cosmopolitan, The Frisky, The Billfold, Lilith and The Forward, among others. She is working on her MFA in Fiction at the Vermont College of Fine Arts and lives in Brooklyn, New York.

Leah Falk is the editor of MFA Day Job. Her work is forthcoming in Hunger Mountain, Cutbank, and Tusculum Review.