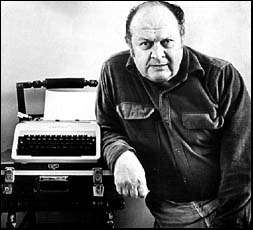 If you are a poet (or a fiction writer) with a day job, rush right out and read Richard Hugo’s essay “How Poets Make a Living,” in his celebrated collection The Triggering Town. The question of how it feels for a poet to work outside academia was one that Hugo, who worked for thirteen years at Boeing, dreaded. Did it matter what one did between the hours of 9 and 5? In “the real world”? “I hate that phrase ‘the real world,'” Hugo wrote. “Why is an aircraft factory more real than a university? Is it?”

Gems from “How Poets Make a Living” include Hugo’s discovery of a 1949 volume titled Advice to a Young Poet. Poets, according to one Llewelyn Powys, should “wash your underclothes with your own hand as though this extra persona fastidiousness were part of a religious rite…Aim at getting up half an hour earlier than other people and walking if possible to catch a glimpse of the sea every morning.” If Powys lived today, it sounds like he might join forces with Gwyneth Paltrow.

Hugo finds all these romantic prescriptions absurd. His own comparisons between the business and academic worlds are level-headed, selfless and hilarious:

Here [academia]: When I first start, twenty-six employees in the department and three of them hate me because I write poems.

There: Those who know I write poems don’t seem to assume anything is special about me.

Here: I’ve been named the head of a student dope ring. A student informant tells the administration I’ve advised students to print and distribute copies of a ‘dirty poem’ about the campus. I am a homosexual. I am a merciless womanizer. I throw wild parties. I write my poems in Italian and then translate them into English. I come to class dressed in dirty, torn T-shirts. I am a liberal, a reactionary, a communist, a Nazi.”

Hugo gives the caveat: “I’m apt to sound too self-assured about the unimportance of a poet’s job because no matter what I’ve done for a living I’ve gone on writing, and because with one exception I’ve never found the initiating subject of a poem where I worked.”